The Herb Society of America
is Seeking Design Art!

Organizers for the Virtual Educational Conference and Annual Meeting of Members (EdCon) to be held June 10th – 12th, 2021, invite artists and designers of all ages and abilities to submit artwork for consideration for the 2021 EdCon logo. The theme is, of course, HERBS!

To enter the contest, participants must:

Smashed plates, sweet wrappers and broken car windows, there’s a use in all of these discarded things for mosaic artist Katy Gailbraith. The Scottish artist, who works from her studio in Perthshire, creates mosaics from mostly recycled and upcycled bits and pieces. Among the artist’s creations include an Om plaque on slate; a turquoise tabletop […]

By The Druid’s Garden

I am excited to annouce that my 2018 Mount Haemus Award article, titled “Channeling the Awen Within: An Exploration of Learning the Bardic Arts in the Druid Tradition” has been released on OBOD’s website (a better formatted PDF is at the bottom of the page; I suggest downloading and reading that). In 2020, I will travel to the UK to deliver a talk tied to the paper itself, as every four years, OBOD offers a Mount Haemus lecture for the four most recent scholars. Every eight years, OBOD publishes a volume, and the next volume will also include this paper. Given this incredible honor–and the fact that the project is now finally finished (whew!)–I wanted to take a bit of time today to talk about the project, what I learned, and how I hope it can help others.

Regeneration, card 79 from the 3rd edition of…

“Logic is a mirror of how the physical world operates.  It is a vital tool.  Imagination is the capacity to make new and different worlds, an unlimited number of them, which can operate on no particular basis at all.”  (The Magician Awakes, Jon Rappoport)

Here is an interesting statement from Dane Rudhyar (1895-1985), about his painting.  Rudhyar was a world-famous astrologer, and also a philosopher, painter, and composer.

“…These youths are also often greatly impressed by my paintings, yet at the same time they are puzzled by them. I am repeatedly asked what the paintings mean, how the evident symbols in them are to be understood…”
“When facing my paintings, a person’s reaction is often that I must have used such geometrical or biologically suggestive symbols deliberately, knowing exactly why I used them. People frequently are shocked when I tell them that I did not have precise intentions and did not think of traditional meanings. Then they often want to speak of ‘the Unconscious’ — my personal unconscious or the ‘collective Unconscious’…”

“They are even more puzzled if I tell them that they should forget the traditional system of knowledge and simply try to experience the drawing and allow it to speak to them and communicate a ‘mystery’ which perhaps transcends or has meaning besides the traditional knowledge.”

“Nearly twenty years ago while in Paris, I attended meetings and lectures at a well-publicized Congrés du symbolisme in the elegant and ultramodern UNESCO Building. At the close of the sessions I vividly realized that the lecturers always spoke of symbols in the past, referring almost exclusively to ancient cultural epochs and traditions. A very intelligent woman I had met who was enthusiastic about all that had taken place asked about my reaction to the Congress. I expressed my deep interest in the proceedings, but added that I felt the talks had been almost entirely, about the past. She looked at me with a puzzled expression and said, ‘But the past is all we know. We do not know the future!’ To which I replied, ‘Of course we do not know the future, but we are creating it!’ The lady gave me a strange look; she could not grasp the meaning of what I had said, and our conversation ended very soon.”

If you say the voyage of imagination is spiritual, people immediately want to know which spiritual system you are talking about, or which principles.  They want art and creation to be an expression of that which is already understood.

But art is not a descriptive sign hanging on the entrance to the cosmos.

Every piece of art is its own cosmos.

It needs no myth structure or origin-story or cultural precedent.

Art is the great exception to every rule of the universe.

If this isn’t magic, nothing is.

Source: Answers in art « Outside the Reality Machine

Like Loading...
I originally saw this on the Did You Know Tumblr blog. Fantastic talent.
Eduardo Kobra.

On August 26, Kobra began his greatest work abroad. It does in Minneapolis, Minnesota, United States, a retelling of the singer and American composer Bob Dylan, on a wall of 50 meters by 20 meters in an Art Deco building at the corner of Henneping with S. 5th Street , in downtown. Kobra is in the US a week ago, accompanied by the artists Agnaldo Brito, Silvio Cesar and Marcos Rafael, all of Studio Kobra. At work will also feature the collaboration of two American workers. “We will show wall in three different stages of Dylan’s career, inspired by the title of one of his most important songs,” The Times They Are a-Changin ‘. Will be a permanent panel of about a thousand square meters, “says Kobra. 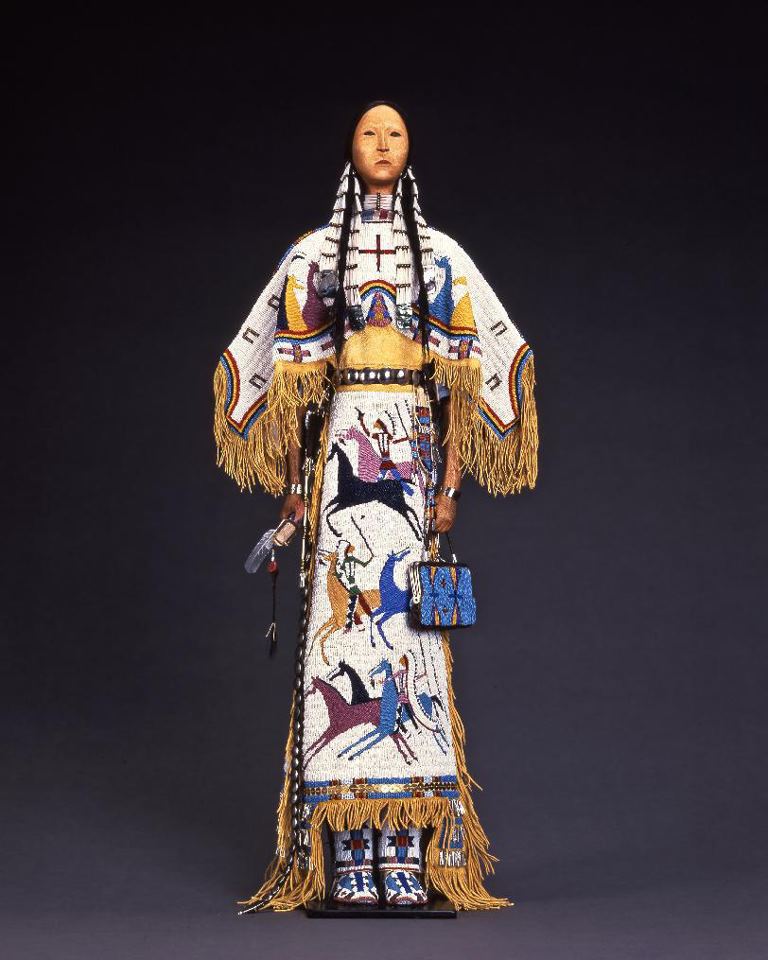 Rhonda Holy Bear is an enrolled member of the Cheyenne River Sioux Tribe. She was born in South Dakota, at Old Cheyenne River Agency, known as “Chief Martin Charger’s Camp.” Rhonda was raised by her grandparents, DeSmet and Angeline (Soft) Holy Bear. Rhonda’s earliest dolls were a hammer and a clothespin and scraps of cloth she found around the house.

At 14, she moved to Chicago to live with an aunt. Rhonda wanted to sing. She wanted to be on television and on the radio. She enrolled in a school that had strong arts and cultural history programs. She found herself drawn to the traditional, hands-on skills of beading and sculpting.

When Rhonda was 18, she picked up a book and discovered a picture of an antique Indian doll from the late 1800’s. She remembered the story her Grandmother had told her, and was inspired to create a doll at that very moment.

She held onto them until 1982, when she saw an ad in The Chicago Sun Times for a new art gallery called American West.

The gallery owner asked Rhonda to bring her dolls to the gallery to show his wife, who was a doll collector. The two dolls sold immediately. The gallery owners requested that Rhonda bring in more dolls for display.  An ad in American Indian Art Magazine, helped introduce Rhonda’s dolls to the world.

Over the next 20 years, Rhonda’s work has been exhibited and collected by many galleries.

With every doll Rhonda asks herself deeper and deeper questions about her subject. The dolls have evolved far beyond being children’s playthings. They represent her family and the roots of her tribal history. They have helped her to complete a circle in her journey as a Lakota.

Rhonda recalls a vivid dream she had when her Grandmother passed away. In the dream, a voice told her that, with her Grandmother’s passing, Rhonda’s back had been shattered. “Those are your relatives,” the voice said, referring to the shattered pieces of her back. “You’ll have to find a way to put them back together again.”

Rhonda says, “My dolls represent my relatives, past, present, and future. Without them, I could not be who I am today. My ancestors and their stories are connected like each vertebrae of my spine. I carry their story with me in my back. It’s a strong place to be.  ”Mitakuye Oyasin”