I’ve been celebrating Imbolc for over a decade and each year I discover more layers to its mythology and food lore. Last year over at Gather Victoria Patreon, I created a Cailleach Ale Cake (the oldest spirit in the world) in honor of the dark counterpart of Brigid,  the Gaelic Cailleach, one of the oldest…

The Caileach’s Red Ale Cake: An Imbolc Tale of the Darkness & the Light — Gather Victoria

This Imbolc recipe might appear to be late (considering it is February 3rd) but I suggest it is right on time. After all, Imbolc or Imbolg, ( an ancient Celtic holiday welcoming the first stirrings spring) was originally a “moveable feast” determined not by fixed dates on the calendar but by shifting heavenly events, specifically…

Imbolc was traditionally a Gaelic holiday celebrated in the holiday celebrating the first signs of spring. When I first started down the path of Druidry, I never felt very connected to Imbolc as a holiday because there seemed to be this huge disconnection between the holiday’s traditional roots and what I was seeing on my own landscape. Part of this is that the weather in the UK is much milder than where I’ve lived and I’m more likely to see at the Spring Equinox–or later–what might be first signs of spring at Imbolc. I thought it was funny when I’d see rituals where I should decorate my altar with snowdrops when they were still another 1-2 months away from coming forth!

My own issue with Imbolc speaks to what I see as one of the major challenges we have in Druidry, here in North America and globally: …

Happy Imbolc! In celebration, I’m sharing this recipe for Whiskey Milk Punch from the Gather Victoria ECookery book (for Gather Patrons) which is called Scailtin in Ireland. It can be dated back to the 1700s where it was commonly served in a punchbowl and drunk warm in a mug – but I’m serving it over…

For years I considered Imbolc, just another extra holy day to be observed.  It didn’t hold a lot of personal resonance with me, and this can feel true for many individuals when it comes to the pagan holy days or witches’ Sabbats.  Simply reading about the day’s history and traditional observances, learning the myth of an associated deity; or making Brigid’s cross every year because that’s just what you do, leaves some wanting for relevance and deeper meaning.   Celebrations like Samhain and Beltane are outwardly witchy and their symbolic associations are self-evident.   While every day can’t be Samhain, (unfortunately!) additional occult understanding of the Sabbats can be discerned by looking at them holistically.  By looking not just at one Sabbat, but three; the Sabbat in question, its predecessor and the one following, we can gain additional insight into the story being played out by the stars.  Think of…

This holiday is called many names including Imbolc, Oímealg, Lá Fhéile Bríde, Laa’l Breeshey, and Gwyl Mair Dechrau’r Gwanwyn and was originally celebrated when the ewes first began to lactate. Some older sources mention Imbolc being celebrated on February 13th, although now the date is fixed on February 2nd. This holiday is a celebration of the loosening of winters hold on the land and the first signs of spring’s immanent arrival. Three main types of ceremonies could be undertaken – purification with water, blessing with fire, and consecration of talismans or charms. In addition, the main ritual theme centered on inviting the goddess Brighid into the home, either in effigy or in the form of a person acting the part.

The fire represents the growing light of the sun. Candles are lit to celebrate the increased daylight, and often candles were blessed for use in the year to come; this…

There is nothing like cake to celebrate a special occasion and Imbolc (on February 2nd) is no exception. And I think this “naked” sponge cake would be a wonderful addition to any Imbolc Feast! It’s kept gorgeously moist with brushings of lavender and rosemary syrup (between cake layers) but the slight tang of the Mascarpone… 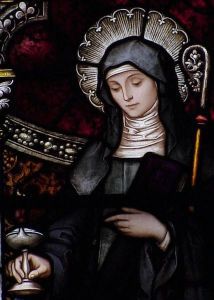 DAY OF THE WEEK: Sunday

LEGEND: Daughter of Dubtach, pagan Scottish king of Leinster, and Brocca, a Christian Pictish slave who had been baptized by Saint Patrick. Just before Brigid’s birth, her mother was sold to a Druid landowner. Brigid remained with her mother till she was old enough to serve her legal owner Dubtach, her father.

She grew up marked by her high spirits and tender heart, and as a child, she heard Saint Patrick preach, which she never forgot. She could not bear to see anyone hungry or cold, and to help them, often gave away things that were Dubtach’s. When Dubtach protested, she replied that “Christ dwelt in every creature”. Dubtach tried to sell her to the King of Leinster, and while they bargained, she gave a treasured sword of her father’s to a leper. Dubtach was about to strike her when Brigid explained she had given the sword to God through the leper, because of its great value. The King, a Christian, forbade Dubtach to strike her, saying “Her merit before God is greater than ours”. Dubtach solved this domestic problem by giving Brigid her freedom.

Brigid’s aged mother was in charge of her master’s dairy. Brigid took charge ,and often gave away the produce. But the dairy prospered under her (hence her patronage of milk maids, dairy workers, cattle, etc.), and the Druid freed Brigid’s mother.

Brigid returned to her father, who arranged a marriage for her with a young bard. Bride refused, and to keep her virginity, went to Bishop Mel, a pupil of Saint Patrick’s, and took her first vows. Legend says that she prayed that her beauty be taken from her so no one would seek her hand in marriage; her prayer was granted, and she regained her beauty only after making her vows. Another tale says that when Saint Patrick heard her final vows, he mistakenly used the form for ordaining priests. When told of it he replied, “So be it, my son, she is destined for great things.”

Her first convent started with seven nuns. At the invitation of bishops, she started convents all over Ireland. She was a great traveller, especially considering the conditions of the time, which led to her patronage of travellers, sailors, etc. Brigid invented the double monastery, the monastery of Kildare that she ran on the Liffey river being for both monks and nuns. Saint Conleth became its first bishop; this connection and the installation of a bell that lasted over 1000 years apparently led to her patronage of blacksmiths and those in related fields.

REPRESENTATION: abbess, usually holding a lamp or candle, often with a cow nearby