by Leigh Scheps of Inside Edition

The first thing Amber Austwick ever said out loud was “I love you” to a donkey. The 6-year-old is a twin who was born prematurely at 26 weeks. She suffered from complications at birth that forced doctors to perform a tracheotomy. Amber never said a word until she met her four-legged friend at this donkey sanctuary. Her time there is therapeutic, and since her introduction to the donkey, Amber’s become a lot more confident.

Source: Girl Who Couldn’t Speak Uttered First Words to Donkey: ‘I Love You’ | Straight from the Horse’s Heart

“Logic is a mirror of how the physical world operates.  It is a vital tool.  Imagination is the capacity to make new and different worlds, an unlimited number of them, which can operate on no particular basis at all.”  (The Magician Awakes, Jon Rappoport)

Here is an interesting statement from Dane Rudhyar (1895-1985), about his painting.  Rudhyar was a world-famous astrologer, and also a philosopher, painter, and composer.

“…These youths are also often greatly impressed by my paintings, yet at the same time they are puzzled by them. I am repeatedly asked what the paintings mean, how the evident symbols in them are to be understood…”
“When facing my paintings, a person’s reaction is often that I must have used such geometrical or biologically suggestive symbols deliberately, knowing exactly why I used them. People frequently are shocked when I tell them that I did not have precise intentions and did not think of traditional meanings. Then they often want to speak of ‘the Unconscious’ — my personal unconscious or the ‘collective Unconscious’…”

“They are even more puzzled if I tell them that they should forget the traditional system of knowledge and simply try to experience the drawing and allow it to speak to them and communicate a ‘mystery’ which perhaps transcends or has meaning besides the traditional knowledge.”

“Nearly twenty years ago while in Paris, I attended meetings and lectures at a well-publicized Congrés du symbolisme in the elegant and ultramodern UNESCO Building. At the close of the sessions I vividly realized that the lecturers always spoke of symbols in the past, referring almost exclusively to ancient cultural epochs and traditions. A very intelligent woman I had met who was enthusiastic about all that had taken place asked about my reaction to the Congress. I expressed my deep interest in the proceedings, but added that I felt the talks had been almost entirely, about the past. She looked at me with a puzzled expression and said, ‘But the past is all we know. We do not know the future!’ To which I replied, ‘Of course we do not know the future, but we are creating it!’ The lady gave me a strange look; she could not grasp the meaning of what I had said, and our conversation ended very soon.”

If you say the voyage of imagination is spiritual, people immediately want to know which spiritual system you are talking about, or which principles.  They want art and creation to be an expression of that which is already understood.

But art is not a descriptive sign hanging on the entrance to the cosmos.

Every piece of art is its own cosmos.

It needs no myth structure or origin-story or cultural precedent.

Art is the great exception to every rule of the universe.

If this isn’t magic, nothing is.

Source: Answers in art « Outside the Reality Machine 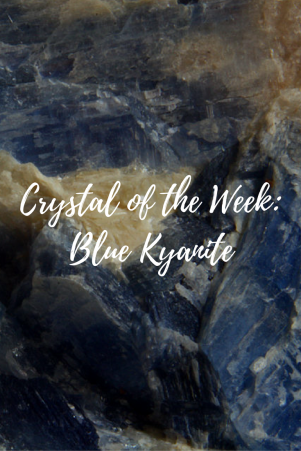 Blue Kyanite is the most well-known color of Kyanite and it’s often used for its ability to align and open all of the chakras. It’s an excellent choice for healers because it places a shield around the healer, conducts healing energy and grounds it.

It’s a high vibration stone with strong crystal energy that will open the throat chakra and promote better communication and self-expression as well as assist the user to speak their personal truth.

Since this stone is so powerful that it does not need to be cleansed. Someone with a lower vibration may feel horrible side-effects from Kyanite because of its ability to raise the vibrations of the wearer to reach a higher state of consciousness.

On a physical level, Blue Kyanite can be used for people who suffer from speech impediments as well as issues with their bone marrow. It promotes mobility in the body and helps with any sort of tissue healing.

This stone can also be used for people who have suffered from strokes, issues with the nervous system, the brain, the thyroid, and any issue that has to do with the throat. It’s also a natural pain reliever and lowers blood pressure and aids in back problems.

Blue Kyanite is great for patients who have had accidents or surgery on any part of the body. It’s also great for people who are low in energy and can assist trauma and replenish one’s energy.

On an emotional level, this stone can be used to promote a healthy communication so it’s great for people who are afraid of public speaking. It also aids tension and promotes tranquility as well as clears and calms the user in preparation for meditation.

The best way to use this stone is during meditation because it allows one to make contact with spiritual beings and can help develop one’s intuition. Blue Kyanite also facilitates meditation and help release fear from both oneself and those the user works with.

On a spiritual level, Blue Kyanite helps clear the meridians and pathways and will restore the flow of energy to the chakras. It also helps with astral traveling, out-of-body experiences, promotes one’s psychic abilities, and makes visualizations stronger.

You can also put Blue Kyanite under the pillow to promote lucid dreams.

Disclaimer: Crystal of the Week are a spiritual support to healing and are not prescription or healthcare information.