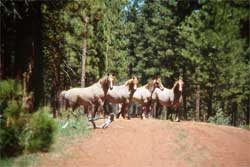 On August 4th, the United States Court of Appeals for the District of Columbia overturned a decision by the U.S. Forest Service (USFS) to cut the size of the habitat area for California’s largest remaining wild horse herd.

The federal agency had planned to remove 23,000 acres from the middle of the Devil’s Garden Wild Horse Territory in the Modoc National Forest. They claim this land was mistakenly added to the wild horse territory in the 1980s and that removing it now would cause “no significant impact.” The Court, however, characterized the move as “arbitrary and capricious.”

The Court found that: “The American…